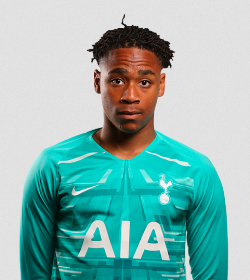 Joshua Oluwayemi has been included on a list of eleven Tottenham Hotspur academy wonderkids to watch out for in 2020 and 2021 by Football London.
Born in London to Nigerian parents nineteen years ago, the goalkeeper's priority is to represent the Nigerian national teams and he's age eligible for the 2024 Olympic Games.
Two other players of Nigerian descent namely Jubril Okedina and Kion Etete represent Tottenham Hotspur's youth teams and the striker who joined from Notts County last summer has been selected as well.
Alasdair Gold wrote on Oluwayemi : "Spurs have a few talented young stoppers with five in and around the first team until Brandon Austin's loan to Denmark.

"It's worth keeping an eye on Joshua Oluwayemi though.

"The young keeper, who turned 19 this month, has stepped up to become a regular for the U23 development squad since November after being first choice for the U18s last season as they battled for the title."
Oluwayemi was Tottenham Hotspur's first choice goalkeeper in this season's UEFA Youth League, and has appearances under his belt in the U18 Premier League and Premier League 2.
He has played non-binding games for England at U15 and U16 levels.
Igho Kingsley
Photo Credit : tottenhamhotspur.com