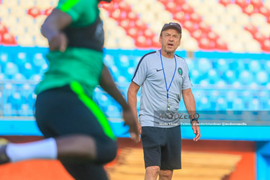 Gernot Rohr has been named among the top five legendary players who have worn the jersey of Ligue 1 club Bordeaux by French journalist Julien Bee.
The Nigeria coach was ranked fifth behind Alain Giresse, Edouard Kargu, Ulrich Ramé and René Gallice.
Rohr is Bordeaux's record appearance holder in the French Ligue 1 over the past fifty years with 352 appearances made before hanging up his boots.
After an illustrious career with Bordeaux, the Franco-German managed the club before he was appointed sporting director.
Explaining why Rohr made the list, Bee told Girondins4Ever : "Gernot Rohr is three times French Champion, he is the most French of the Germans: 84, 85, and 87. 430 matches played for Gernot Rohr with the Girondins, two French Cups (86 and 87) and obviously a semi-final Champions Cup, with a defeat in the second leg against Juventus.
"Bordeaux won 2-0, but lost in the first leg 3-0. This team, at the time, was one of the best in Europe, and there were players within it, which were quite significant.
"Gernot crossed this time with the Girondins. He arrived at the end of the 70s. Even if I decided not to talk about the aftermath, Gernot was also a sports director, coach twice, and notably in the second division when Bordeaux was demoted.
"It must be said, he is an important personality of the club, even today. Even if he is the Nigeria coach, he still has ties with Girondins, always that little belonging.
"He is an essential player, an essential personality in the Girondins de Bordeaux universe. For me, it was not possible not to place him in this Top 5, even if statistically, and in terms of prize list, it is rather not bad. It is even better in title than my number 1 ".
Since Rohr's appointment as Super Eagles coach in 2016, he has handed debuts to two Bordeaux players in Samuel Kalu and Josh Maja.
Igho Kingsley
Copyright ANS
All rights reserved. This material, and other digital content on this website, may not be reproduced, published, rewritten or redistributed in whole or in part without prior express written permission from allnigeriasoccer.com