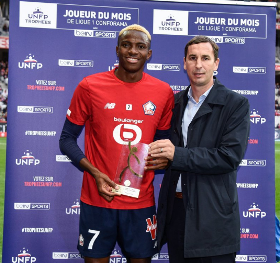 Arsenal have reignited their interest in Nigeria international Victor Osimhen, if we are to believe reports in the French media.
Le Quotidien du Foot has claimed that the Gunners are among a plethora of clubs linked with a move for the Lille striker in the next transfer window.
Arsenal face competition from Premier League rivals Chelsea, Tottenham Hotspur, Manchester United and Manchester City for the services of Osimhen.
There is also interest from other major clubs in Europe with La Liga giants Barcelona, Real Madrid, Valencia and Sevilla as well as Italian quartet AC Milan, Roma, Lazio and Napoli all keeping tabs on the 21-year-old.
Osimhen turned down the opportunity to move to Arsenal four years ago after winning the Golden Boot award at the FIFA U17 World Cup because his advisers and grassroots club Ultimate Strikers Lagos preferred Bundesliga outfit  Wolfsburg.
The last two seasons have been very good for Osimhen who has plundered 38 goals combined in 74 matches for Lille and Sporting Charleroi.
The 2015 U17 World Cup winner is under contract with Lille until June 2024 and is valued at 30 million euros by Transfermarkt, way below Lille's asking price of more than eighty million euros.
Ifeanyi Emmanuel
Photo Credit : losc.fr
Copyright ANS