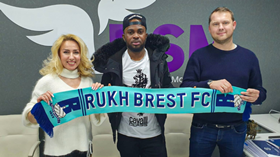 Measures are been taken to prevent the spread of Covid-19, prominent amongst it is the calling off of all footballing activities in most countries.

But in Belarus, there is no stopping. So, allnigeriasoccer.com has picked out four of the Nigerian exports who are still in competitive action with their clubs in the Eastern European nation.

It was the second league game the midfielder has played for the club this year, starring as they Dinamo Minsk on the 20th of this month.


Mohammed Umar (Slutsk): Umar had won and lost one of the two games he's turned out in for Slutsk this month, the latest being the 1-0 defeat to Dinamo Brest last Saturday.
The midfielder who made way for Alan Koroev after 69 minutes was a second half substitute in the 3-1 victory over FK Slavia Mozyr.

The 19-year-old who starred for the Dream Team at the last AFCON U-23 tournament has established himself as an important player for the club.


Emmanuel Chinaza
Photo Credit : rukh.by
Copyright ANS
All rights reserved. This material, and other digital content on this website, may not be reproduced, published, rewritten or redistributed in whole or in part without prior express written permission from allnigeriasoccer.com