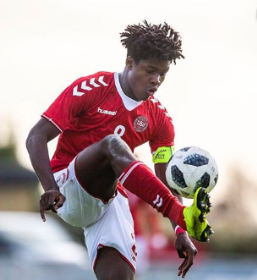 Danish-born midfielder of Nigerian descent Tochi Chukwuani is the youngest Nigeria-eligible player to feature in Europe's top fifteen leagues so far in the 2019-2020 campaign, allnigeriasoccer.com reports.
The top fifteen European Leagues are : La Liga, Premier League, German Bundesliga, Serie A, Ligue 1, Primeira Liga, Russian Premier League, Belgian First Division A, Dutch Eredivisie, Ukrainian Premier League, Super Lig, Austrian Bundesliga, Danish Superliga, Scottish Premiership and Czech First League.
Chukwuani made his professional debut for Danish top-flight club FC Nordsjaelland on September 22, 2019, coming off the bench to replace Magnus Kofoed Andersen in the 82nd minute.
The highly-rated midfielder was aged 16 years and 182 days when he played his maiden game in the Danish Superliga and still holds the record of being the youngest player of Nigerian descent to make a league appearance in the top fifteen leagues in Europe this season.
He has totaled five appearances in all competitions for FC Nordsjaelland since his professional debut.
Chukwuani has fifteen games under his belt for Denmark's U17 national team and skippered the Scandinavian country in at least four of their matches this season.
Ifeanyi Emmanuel
Photo Credit : instagram.com/t.chukwuani10
Copyright ANS