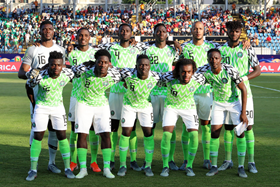 Former Super Eagles defender Ajibade Babalade has opined that the global pandemic affecting sports could impact on the remaining 2021 Africa Cup of Nations qualifiers with Nigeria scheduled to play against Sierra Leone on Match day 3 and 4 of the qualification campaign.


The Eagles were billed to host the Leone Stars on March 27 at the Stephen Keshi stadium, Asaba and then travel to Freetown four days for the reverse fixture but the Confederation of African Football (CAF) like other continental ruling bodies in the world postponed the qualifiers in Africa.
Babalade who was part of Nigeria's Super Eagles squad to the 1992 Africa Cup of Nations bared his mind in a chat with allnigeriasoccer.com on Wednesday.


"The postponement was for the good of all because the Coronavirus pandemic is everywhere in the world," Babalade said to allnigeriasoccer.com.
"It will affect other teams in our group not only the Super Eagles. It is indeed affecting every team in the world you know.
"The  expectation is that this disease will peak before the proposed September for the qualifiers to start again.

"There have been only two group matches so far and should medical experts not give the all clear, this might even affect the AFCON starting in January of 2021 but I really hope not," the onetime Shooting Stars of Ibadan player affectionately called 'Kunde' after  Cameroon icon Emmanuel Kunde stressed.

CAF in a statement recently reiterated that the AFCON which was moved from June and July 2021 to January 9- February 6, 2021 will not suffer a postponement despite the health challenges of late.

September has tentatively been slated for the matches originally billed for March to hold.