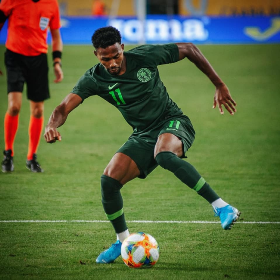 Club Brugge are eyeing a move for Fortuna Düsseldorf's Nana Ampomah to bolster their attack next season.
Voetbalbelgie says the Ghana international has been lined up to replace Emmanuel Dennis or Krépin Diatta if they end up leaving Club Brugge at the end of the 2019-2020 season.
Club Brugge manager Philippe Clement worked with Ampomah at Waasland-Beveren and had attempted to sign him while he was coaching Racing Genk.
Dennis has been heavily linked with a departure from Club Brugge this summer and has attracted interest from teams in England, Germany and France.
The Super Eagles winger has registered nine goals in all competitions this term, including his brace against Real Madrid in the Champions League and his strike against Manchester United in the Europa League.
Dennis' market value has skyrocketed following his brilliant performances and he's now rated at 17 million euros.
Igho Kingsley
Copyright ANS