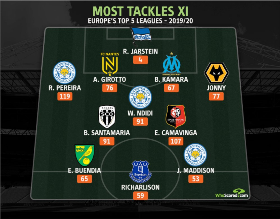 Nigeria international Wilfred Ndidi has been named to Whoscored's Most Tackles XI Europe's top five leagues for the 2019-2020 season.
The Leicester City star was part of a midfield three also containing Baptiste Santamaria (Angers SCO) and Eduardo Camavinga (Rennes).
The eleven players listed on the Most Tackles XI have a combined total of 809 tackles with Ndidi accounting for 91.
The Premier League has contributed the most number of players to the Most Tackles XI, seven in total, including Leicester City trio Ndidi, Ricardo Pereira and James Maddison.
On Ndidi, Ben McAleer wrote : "The second of three Leicester representatives in this XI, the Foxes' performances have been sub-par in Wilfred Ndidi's absence this season and for good reason, too.

"The all-action Nigerian has the knack of alleviating pressure on the defence with ease as his 91 tackles suggests."
Ifeanyi Emmanuel
Copyright ANS