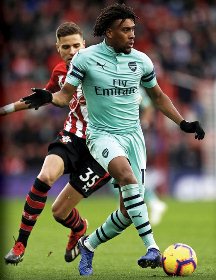 Three Nigerians in the shape of Alex Iwobi, Chuba Akpom and Bukayo Saka were conspicuously missing from a list of Arsenal's best starting team of the Emirates era, allnigeriasoccer reports.

Football London's Art De Roche has drawn up the Gunners best starting XI since the North London outfit swapped Highbury for the Emirates stadium in 2006, with the three Hale End Academy graduates failing to make the cut.

Iwobi who was on the books of Arsenal for 17 years before jumping ship to Everton in the summer of 2019 was snubbed in midfield for the likes of Cesc Fabregas, Alex Song and Santi Cazorla.

Now with PAOK in the Greek Super League, Akpom represented the club's senior side between 2013 and 2018 but Theo Walcott, Pierre-Emerick Aubameyang and Alexis Sanchez were the favoured options upfront on the XI.

There was also no place for the newest darling of the club, Saka who has been made to shoulder a magnificent responsibility this season, with Bacary Sagna occupying the right-back slot on the team while Nacho Monreal took up the left-back position.