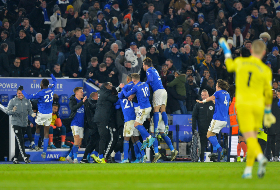 Wilfred Ndidi made a surprise choice when he was asked to name his best friend in the Leicester City squad.
Understandably, the Nigeria international decided not to pick Kelechi Iheanacho, whom he has known for eight years as the pair were both teammates in the Golden Eaglets and Flying Eagles, and were promoted to the Super Eagles almost at the same time.
Ndidi explained why former Manchester United star Johnny Evans is his best friend at the King Power Stadium and revealed that he has a 'cat and mouse relationship' with Jamie Vardy.
Speaking on Instagram Live, the Foxes number 25 stated : "I am cool with everyone but I'll say me and Vardy are like cat and rat, he's a funny guy. He always interacts with us when we are speaking pidgin English.

"The person I really like is Johnny Evans. Johnny Evans is one player I grew up watching".
This season, Nath Boys product Ndidi has appeared in 23 Premier League matches, scoring 2 goals with one assist to go with it.
Ifeanyi Emmanuel
Copyright ANS