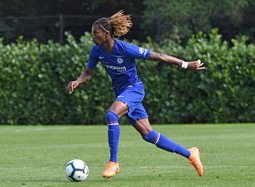 Chelsea midfielder Tariq Uwakwe has revealed that he is maintaining his fitness during isolation with a view to the resumption of sporting activities in England.
The Blues want their players to return to training in the best physical condition and have put them on a fitness regime.
Prior to the enforced break, Uwakwe started each of the last six games contested by Chelsea in the Premier League 2, having recovered from an injury that kept him on the sidelines for three months.
Speaking to the official webpage of the Blues, Uwakwe said : "Since I’ve been away from the club I've been trying to get down to the park whenever I can to maintain my fitness and keep sharp.
"We get given programmes to do as well and I have a lot of gym equipment that I use at home myself.

'It’s essential right now to not lose too much fitness and to make sure that I can go back sharp for either the remainder of this season or kick off a big next season well."
London born Uwakwe, who has been at Chelsea for more than ten years, has played non-binding matches for England U18, U19 and U20 national teams.
Ifeanyi Emmanuel
Photo Credit : chelseafc.com
Copyright ANS