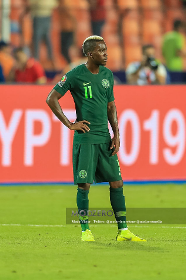 Nigeria international Henry Onyekuru wants to extend his stay at Turkish champions Galatasaray, according to various reports in the Turkish press.
Fanatik claims the winger is preparing to contact his parent club, Monaco informing the Principality side of his decision to remain at Galatasaray.
The initial agreement between the two clubs will see the Nigerian return to Monaco on June 1, 2020 as there was no purchase clause inserted into the contract he signed this January.
Galatasaray will have to negotiate a fresh loan deal with Monaco or buy the player, who is valued in the region of ten million euros, outright.
The 22-year-old who was acquired from Everton last summer for a fee of €13.5 million has failed to hit the ground running at Monaco, making only two starts in the Ligue 1 before he was shipped out on loan.
Onyekuru's contract with Monaco runs out at the end of the 2023-2024 season.
Since returning to Galatasaray for a second spell, he has made nine appearances in all competitions, with seven coming in the Turkish top-flight, and has scored one goal while providing two assists.
Igho Kingsley
Copyright ANS