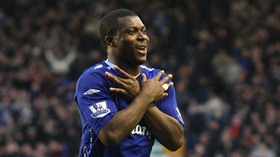 Legendary Australia striker Tim Cahill has named Yakubu among the amazing group of players assembled by manager David Moyes during his coaching spell at Everton.
Yakubu arrived Everton in the summer of 2007 for a club transfer record of £11.25 million and went on to score 33 goals in 108 appearances in his four years at Goodison Park.
Portsmouth's all-time leading scorer in the Premier League had a two-year spell at Middlesbrough, for whom he played in the final of the UEFA Cup in 2006, before joining Everton.
Asked about his fond memories at Everton, Cahill told Sky Sports : "David Moyes built an amazing group of players. We had Arteta, Joleon Lescott, Leighton Baines, Seamus Coleman, Tim Howard, Marouane Fellaini, Phil Neville, Louis Saha, Yakubu, Phil Jagielka - the list goes on.

"He picked players from the Championship, and the great thing was that he had a leadership group that he trusted."
With 95 goals in 252 games, Yakubu is the leading Nigerian scorer in the history of the Premier League ahead of illustrious names such as Kanu, Efan Ekoku and Shola Ameobi.
Ifeanyi Emmanuel
Photo Credit : evertonfc.com
Copyright ANS