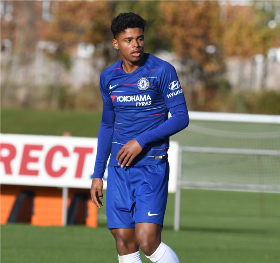 Chelsea's Nigeria-eligible starlet, Faustino Anjorin was one of the most talked about youngsters in the Premier League just a month ago and the reason was not far-fetched.

Just before the postponement of all sporting activities no thanks to the corona virus pandemic, the 18-year-old was afforded his top flight debut by manager Frank Lampard when he came on for Willian in the 71st minute of the 4-0 win over Everton.

During his bow, the midfielder was hailed as having a 'big reputation' by Jim Proudfoot and according to the legendary football commentator was only going to get better with each game he gets to play for Chelsea.

It is no secret that the youngster who recently earned himself a new contract at Stamford Bridge is highly rated and having began to get games under his belt, will sooner rather than later become even a much mentioned name in the Premier League.

One will reckon that before his league debut, he has already turned out for the Blues in a 7-1 demolition of Grimsby Town in a League Cup game last year.

Outlining the qualities of the Poole-born winger, he has been described as a pacy, strong player who has earned comparisons with teammate Ruben Loftus-Cheek.

While he is still learning the ropes at Stamford Bridge, it is envisaged it is only a matter of time before he gets more chances to make his mark on the team, with the likes of Willian and Pedro fast ageing and past their prime.

It is still a long way to go but if Anjorin's performances for the club's youth teams is anything to go by, then he could have a big role to play for Chelsea in time to come.