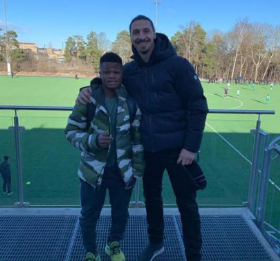 Nigeria U17 international Akinkunmi Amoo has confirmed that a deal is in place for him to join Swedish Allsvenskan side Hammarby when he clocks 18 on June 7, 2020.
The Sidos FC attacking midfielder had been linked with possible moves to clubs in France, England, Italy, Germany, Netherlands and Spain, but opted to join Hammarby because they promised him a taste of first team football.
Amoo, who has returned to Nigeria, confirmed that he trained with the first team of Hammarby during his recent trip to Sweden.
"The reason I chose Hammarby is that I have been to the club to see things for myself, I have signed a pre-contract with them. The deal is for four years," said Amoo to allnigeriasoccer.com.

"I noticed one thing about the club because they assured me that they will give me the chance to prove my talent, that's the first reason I chose the team.

"I made my decision at the right time because their league will start soon, as soon as the coronavirus ends. They promised me that they will put me in the first team."
Amoo admitted that he is using Hammarby as a stepping stone to bigger things and does not see himself spending fours years at the club before he is spotted by a bigger European team.
"If I impress at Hammarby, my next transfer will be better. It's better than playing for a reserve team in Europe and nobody will see me. How can I prove myself to the Nigeria U20 coaches?

"At Hammarby if I am performing the national team coaches will notice me. Other European teams will also be watching me.

"Many European clubs contacted Sidos Academy but I told them it's better I go to Hammarby where I will play".
Hammarby part-owner Zlatan Ibrahimovic personally ran the rule over Amoo last month and was pleased with what he saw.
Sharing the advice he received from the iconic Swedish striker, Amoo said : "When I went to Sweden I trained with the first team, Ibrahimovic came around to see me. I spoke with him. He told me I'll play for the first team, he's a player also and saw my talent and knows what I can do.

"Ibrahimovic advised me to be focused, train well, listen to the coach and prepare myself to start playing because the fans will support me. Hammarby coach is convinced I can play for the first team straightway."
Amoo was one of the standout players for the Golden Eaglets at the U17 World Cup and provided three assists during the tournament in Brazil.
Ifeanyi Emmanuel
Copyright ANS