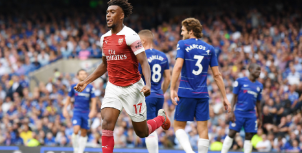 Alex Iwobi considers former Tottenham Hotspur right-back, Serge Aurier as the toughest opponent he has faced in his career.
The Nigeria international recollected that it was difficult facing the Ivorian because of his offensive attributes when Arsenal tackled Paris Saint-Germain in the UEFA Champions League in September 2016.
In an Instagram Live conversation with Don Dada, Iwobi stated when asked to name the toughest opponent has has played against : "There's one time we played PSG in the Champions League, it was against Serge Aurier - the way he likes to bomb forward.
"And they scored in the first few minutes, he was the engine of it. When you are a winger and you have to track back, it's not nice, you have to try and get forward."
When asked to name the top five footballers he played with in his career, Iwobi chose Santi Cazorla, Glen Kamara, Chuba Akpom, Mesut Ozil and Francis Coquelin in that order.
Iwobi has defended Ozil's work ethic despite fans criticizing the German World Cup winner for his laid-back approach during games, and wants his childhood pal Akpom to be invited to the Super Eagles.
"The first one is Santi Cazorla, he was crazy. When he comes to the pitch and touches the ball, it's like he's blessing the ball.

"I always say this one, Glen Kamara, the most underrated footballer. I remember back in the day me and him in midfield for our youth team.

"Number 3, just because I played with him from young so the chemistry whenever we play, Chuba. We never got to express it for Arsenal. Even now I am hoping he gets a call-up for Nigeria because of the chemistry.

"Four is Ozil, he was crazy. Obviously because of his body language people think he's not working hard but he actually works hard, people judge it wrong.

"They are going to find this a bit weird but I'm going to say Francis Coquelin. I have been lucky to play with world class players."
Iwobi made 22 appearances in all competitions for Everton, scoring two goals before football activities were suspended in England last month.
Ifeanyi Emmanuel
Photo Credit : arsenal.com
Copyright ANS