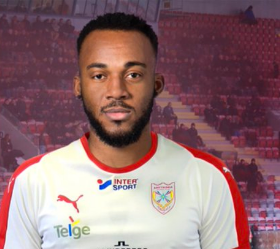 Through a statement on their official website, Swedish Division 2 club Assyriska FF have announced the signing of Nigerian striker Uchenna Ike on undisclosed terms.
The 30-year-old has joined Assyriska FF from Division 1 side Sollentuna FF, and also lists Valsta, Pitea IF, Vasalund and Carlstad United as his previous clubs in Sweden.
In his first words as a player of Assyriska FF, Ike said : "Thanks so much, it feels good to sign for Assyrian. The team has ambitions to step up to Division 1 and I have wanted to play for a club that has those ambitions."
On what convinced him to join the club, he added : " I played against Stefan Batan in Division 1, he's a really good player. I have also looked at several clips of him.
"When he called me and told me about the club's plans for the season, he convinced me.
"I would rather play higher up but when I heard from Stefan about the club's ambitions, I became convinced to help the club take the step back."
Igho Kingsley
Photo Credit : assyriska.se