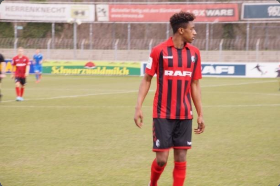 Former Bayern Munich left-back Kimberly Ezekwem is urging exciting teenage striker Joshua Zirkzee to stick with the Netherlands for the time being rather than pledging his international future to Nigeria.
Ezekwem was teammates with Zirkzee at the Bayern Munich academy for a year, before the defender joined SC Freiburg for the 2018-2019 season.
The international future of the 18-year-old attacker has been the subject of speculation in recent months, fueled by the fact that he was personally scouted by Super Eagles manager Gernot Rohr when he made his full Bundesliga debut against Hoffenheim at the end of February.
Born in Schiedam, Netherlands, Zirkzee qualifies to represent Nigeria through his mother and his father is Dutch.
"I think in the youth it would be better for Zirkzee to represent Netherlands because he has lived there and he could win trophies with the team, " said Ezekwem to allnigeriasoccer.com.
"Zirkzee knows how to handle the ball, he's pretty fast, strong and tall, which is also an advantage."
Ezekwem, 18, is a key player for SC Freiburg's U19 team and has been involved in fifteen of their matches in the
A-Junioren Bundesliga Süd/Südwest, scoring two goals.
Ifeanyi Emmanuel
Copyright ANS