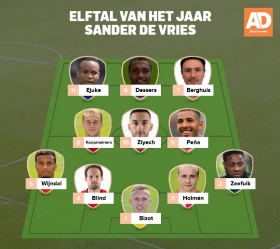 Two attack-minded Nigerian players, Cyriel Dessers and Chidera Ejuke, have been included in a Dutch Eredivisie Team of the Season published by Dutch daily newspaper Tubantia.
Both Dessers and Ejuke were outstanding in the 2019-2020 season which was recently cancelled by the KNVB, with both scoring a total of 24 goals combined and the Heracles Almelo frontman accounting for 15.
In a 4-3-3 formation favoured by most Dutch teams, Dessers occupied the center forward position and was flanked by Ejuke on the left and joint top scorer, Feyenoord's Steven Berghuis on the right.
A showboater, Ejuke mesmerized fans with his skills over the course of the season and several Super Eagles fans have been clamoring for his invitation to the national team.
Nigeria manager Gernot Rohr recently revealed that he has watched a video of Ejuke with a view to a call-up to the Super Eagles in the near future.
"There’s even this new guy I saw on video, I love the way he plays. He plays his club football in Holland (Chidera Ejuke)," the Franco-German football tactician said.
Both Dessers and Ejuke are being linked with departures from their current clubs in the summer transfer window.
Eredivisie Team of the Season in full : Marco Bizot (AZ); Deyovaisio Zeefuik (FC Groningen), Sebastian Holmén (Willem II), Daley Blind (Ajax), Owen Wijndal (AZ); Sergio Peña (FC Emmen), Hakim Ziyech (Ajax), Teun Koopmeiners (AZ); Steven Berghuis (Feyenoord), Cyriel Dessers (Heracles) and Chidera Ejuke (SC Heerenveen)
Igho Kingsley
Copyright ANS