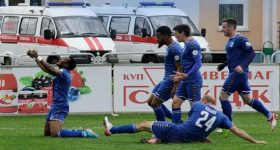 Nigerian midfielder Umar Mohammed Bala is now the second highest goalscorer in the Belarusian Premier League following his brace for Slutsk in their 3-2 win against Belshina at the Stadyen Haradski on Sunday afternoon, allnigeriasoccer.com reports.
Football activities were not postponed in Belarus in the wake of the coronavirus outbreak and majority of the matchday six fixtures went ahead as planned last weekend.
Having fired blanks in his first three matches in the 2020 campaign, Bala opened his goalscoring account for the season as Slutsk earned a 2-1 win against Shakhtyor on April 17.
Against Belshina on Sunday, the 22-year-old opened and closed the scoring in the 20th and 88th minute respectively, taking his tally for the season to three goals.
Only Dinamo Minsk's Evgeni Shikavka, who has found the net four times, has scored more than the Nigerian in the ongoing campaign.
Joining Bala on three goals are seven other players : Dragun (BATE),  Kadimyan (Neman), Komarovskiy (Isloch), Kovel (Belshina),  Serdyuk (Slutsk), Yansane (Isloch) and Yaxshiboev (Energetyk-BGU).
The Slutsk number 17 played for Kada City prior to his move to Belarus in the January transfer window.
Igho Kingsley
Photo Credit : sfc-slutsk.by
Copyright ANS