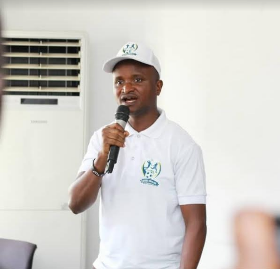 A bad choice of intermediary/representative could bring about several career hardships including missed opportunities, poor career choices, inability to fulfill one's potential and could even force an athlete out of sports.

Via the handle of Myron Topclass Sport Outfits which he represents, Endurance Iseri Ogbemudia let out that even though a good choice of an intermediary doesn't Guarantee a successful career, it is pertinent to allow a professional in that line get the job done, adding that several opportunities will arise from it.

In his words "A few years ago, FIFA changed the way in which agents are regulated. Before April 2015, becoming an agent involved passing a difficult exam, but now registration with your country FA allows anyone to operate as an intermediary."


He added that " There are several high-profile examples of players who rely on family members, friends or other professionals to represent them.
"Whether or not this is appropriate for a player will depend on his circumstances, the people around him and his requirement but you cant underplay the expertise of a professional intermediary.
"In general, this is likely to be a more viable option once a player has established himself as a professional.Stay away from an intermediary who refuses to collaborate with other intermediaries too."
Eddie as he's fondly called said fake and dishonest football agents have brought doubts to the mind of footballers and harped on the need to do a thorough background check on anyone who claims to be an agent.