...the complete Nigerian football portal
Subscribe
Sven-Goran Eriksson Says NFF Offered Him Super Eagles Job On The Proviso That His Salary Would Be Divided Into Two Parts
Published: April 30, 2020 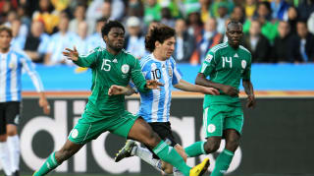 Former England coach Sven-Göran Eriksson has made a big claim about the corruption in the Nigeria Football Federation by revealing that he was offered the Super Eagles job in 2010 on the proviso that his salary would be divided.
Following the dismissal of late Shuaibu Amodu after the 2010 Africa Cup of Nations, Nigerian Federation were on the lookout for a marquee coach to lead the country to the World Cup and approached Giovanni Trapattoni, Arigo Sacchi, Guus Hiddink, Glenn Hoddle, Eriksson and Louis van Gaal.
However, it was Swedish coach Lars Lagerbäck, whose curriculum vitae was not richer than the aforementioned coaches, that eventually got the job.
"The only time I can remember having undergone any form that resembles an interview was when I was asked about the job of Nigeria's national team coach in 2010 ahead of the World Cup in South Africa," Eriksson told branschen.se.

"I went down in the belief that I would meet the chairman of the Nigeria Football Federation and that it was really only contract formalities that we would go through.
"But when I arrived, several coaches had received the same invitation, including Lars Lagerbäck. I was very surprised, but found myself quite quickly."

He continued : "After a while, I was called into the room with a chairman who declared that they wanted me as a coach, but with the proviso that my salary would be divided into two parts.
"One that I got into my account and another that would be deposited into another account that was not in my name.
"Then I refused to stand there,  I thought something didn't go right".
Glenn Hoddle, another of the candidates to coach the Super Eagles in 2010, claimed that he agreed a US$1m short-term deal with the Nigerian Federation in the months leading up to the World Cup but an official informed him that it would be announced as US$1.5m.
Ifeanyi Emmanuel
Photo Credit : fifa.com