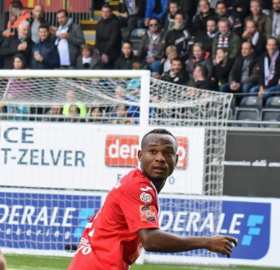 2013 U17 World Cup winner Saviour Godwin is on the radar of French Ligue 1 club Stade Brest FC and Eredivisie outfit Willem II ahead of the upcoming transfer window, according to Kuli Kuli Football.
With KSV Roeselare still having liquidity problems, the Nigerian is preparing to bid farewell to the West Flanders club when he officially comes off contract on June 30.
Stade Brest and Willem II have contacted KSV Roeselare asking for information about Godwin and the scouts of both clubs are in touch with the player's agent, with a view to thrashing out terms.
The 23-year-old arrived at KSV Roeselare in August 2016 and has gone on to make 109 appearances for the club in all competitions, scoring 21 goals.
Godwin was introduced off the bench in six games at the 2013 U17 World Cup in United Arab Emirates.
He later starred for the Flying Eagles at the 2015 U20 World Cup and was named in the country's provisional squad for the 2016 Olympic Games.
A two-footed winger, he turned out for local clubs FC Sports Jos and Plateau United prior to his move to Belgium in 2015.
Ifeanyi Emmanuel
Copyright ANS