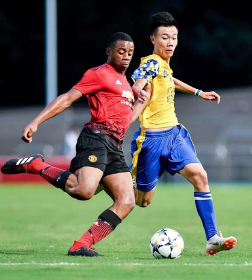 Allnigeriasoccer.com has been told that Tottenham Hotspur have passed up the opportunity to sign Manchester United's Nigerian youngster Junior Nkwonta.
Having informed him that he won't be offered a scholarship for the 2020-2021 season, Manchester United permitted Nkwonta to train with the north London club before football activities were halted in England.
Tottenham claimed that they were not interested in offering the central defender a contract due to his height.
Following the rejection by Spurs, Nkwonta is considering a change of position, from a center back to a defensive-minded midfielder.
The teenager has also trained with Football League clubs Peterborough United and Exeter City with a view to being offered a contract, and expects to get more trial opportunities when football activities resume in England.
Assuming Nkwonta was offered a new deal by Manchester United, he would have played alongside Shola Shoretire, Dillon Hoogewerf and Ayodeji Sotona in the U18 team next season.
Hoogewerf signed his first professional contract in March while Shoretire will be a first year scholar at the Red Devils next season.
Ifeanyi Emmanuel
Copyright ANS