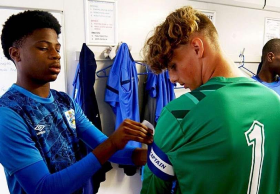 Allnigeriasoccer.com can exclusively report that Huddersfield Town have won the race to sign exciting Nigerian fullback Charles Ondoh.
The left-back has agreed a two-year scholarship with The Terriers which will come into effect on July 1, 2020.
Knowing full well that Ondoh was attracting huge interest from rival clubs, Huddersfield Town gave him an ultimatum to sign the scholarship and he accepted.
Predominantly a left-back, he is also comfortable playing as a wing-back and winger, and has been tipped as one for the future.
The promising defender was on trial at Norwich City and Stoke City, while Sheffield United and West Brom had explored the possibility of signing him before he agreed terms with Huddersfield Town.
Ondoh will be hoping to follow in the footsteps of Nigeria Football Federation target Philip Billing, who was an academy player before making his first team debut for Huddersfield.
Talented Nigerian defender Mustapha Olagunju, who was loaned out to Tadcaster Albion in the January transfer window, plays for Huddersfield Town U19 team.
Ifeanyi Emmanuel
Copyright ANS