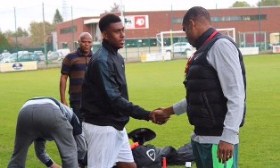 Former Nigeria international and later head coach of the national team Sunday Oliseh  on Wednesday backed the potential move from Manchester City to Bayern Munich of winger Leroy Sane who is recuperating from a season long injury.
Sane was injured in City's Community Shield game against Liverpool and was recovering from the anterior cruciate ligament damage before football was halted due to the coronavirus pandemic.

The German international of Senegalese descent had been a long term target of the Bavarians who are leading the Bundesliga table.


Oliseh who played club football for German sides, Cologne and Borussia Dortmund took to social media platform, Twitter, to express his happiness for the speedy forward.
"Would be a great acquisition for Bayern and a gigantic loss of pace,technique and goals  for Man. City.

"Happy for the lad and one of my favourite players though," Oliseh tweeted Wednesday.

Germany's Prime Minister Angela Merkel on Wednesday approved the return of the league in the top two divisions later in the month of May.