...the complete Nigerian football portal
Subscribe
'Adelakun Was The One Doing All The Job Looking For Players' - Nigeria Great Odegbami Blasts Rohr
Published: May 07, 2020 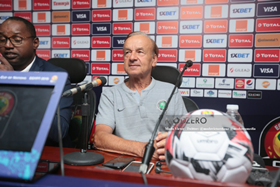 In a no-holds-barred interview with Nigerian television station Plus TV Africa monitored by allnigeriasoccer.com, legendary Nigeria winger Segun Odegbami strongly criticized the decision of the Nigeria Football Federation to give a new contract to Gernot Rohr.
The Franco-German football tactician is on the verge of inking a new deal with the NFF amidst all the conditions laid out in the proposed deal, including living in Nigeria to monitor potential Super Eagles players in the domestic championship and being paid in the local currency.
"I don't know about the plot to send him packing, I have been an advocate of the end of foreign coaches in Nigerian football and I stand by that," said Odegbami.

"It is very insensitive of people at this time in our history considering where we are now with the coronavirus opening our eyes to the new realities of the world for us to continue to go back to something that has failed us."

The highlight of Odegbami's interview was when he revealed that English-based scout of Nigerian descent, Tunde Adelakun was the one doing most of the job assigned to Rohr.
Adelakun has often been sighted at English Premier League match venues monitoring players of Nigerian descent with a view to a call-up to the national team.
"Gernot Rohr didn't succeed, he took all that money, didn't spend his time in this country.
"A black young Nigerian man, Tunde Adelakun was the one doing all the job, combing the whole of Europe to look for players and all Gernot Rohr was doing was spending few days to assemble players and play matches.

"Besides that his scoreline is not anything that Nigerians have not done before so we must put an end to this slavery and colonial mentality," Odegbami added.
The 1980 Africa Cup of Nations winner concluded by saying that an indigenous coach should be in charge of the Super Eagles
"Nigerians at this point have to look inwards, everything around us shows that these people out there don't love us so they can't love our country more than us.

"We have Nigerians who can do the job, they have always done the job and they can still do the job.
"Gernot Rohr, we have no business discussing with him, his contract expires in June, he should just go quietly."
Igho Kingsley
Copyright ANS