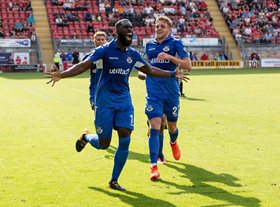 Former Nigeria U23 invitee Ayo Obileye will bid farewell to Ebbsfleet United when he comes off contract this summer, the National League club have informed via their official website.
Obileye is among the seven players departing the Reds in the off-season, the others being Tomi Adeloye, Nathan Ashmore, Andre Blackman, Alex Lawless, Sean Shields and Aswad Thomas.
The 25-year-old joined Ebbsfleet United in June last year from Maidenhead United, and made 27 appearances in the fifth-tier this season, scoring three goals.
The central defender cum defensive midfielder spent his formative years as a footballer with the youth teams of Leyton Orient and Chelsea, before joining Sheffield Wednesday in 2011.
Obileye's other teams include Charlton Athletic, Dagenham & Redbridge, Eastleigh and Dover Athletic.
He trained with Nigeria's U23 national team in April 2016 but didn't make the roster for the Olympic Games.
Igho Kingsley
Copyright ANS