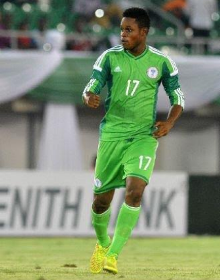 Latvian Virsliga side FK Ventspils are on the verge of confirming the signing of ex-Flying Eagles star Christian Pyagbara.
Pyagbara is the third Nigerian player added to FK Ventspils roster for the 2020 season, after 2013 U17 World Cup-winning goalkeeper Dele Alampasu and Kazeem Ojo Aderounmu, who was acquired from Real Sapphire FC .
The 24-year-old center forward has inked a two-year contract, keeping him at Ventspils until December 2021.
"I chose to join Ventspils because they are playing in the Europa League qualifiers and they are a good club too, I have been handed the number 30 jersey, " said Pyagbara to allnigeriasoccer.com.
"I have started training with the club since last week Monday, players are divided into two so we don't have body contact.
"Alampasu and Kazeem have helped me settle down and get used to the club, things are easy for me here."
The deal taking him to Ventspils was brokered by John Chibuzo Nwankpa of JCN-Johnson Sports Management, who also handles the affairs of Alampasu.
Pyagbara has been issued a one-year work permit, paving the way for him to play competitive matches for his new employer when the Latvian Virsliga begins.
He has already done a photo shoot and will be unveiled by Ventspils in the coming days.
Ifeanyi Emmanuel
Copyright ANS