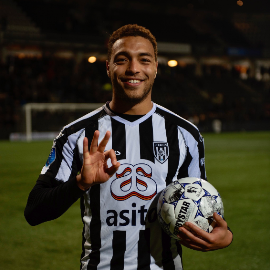 It has come to light that Roda JC passed up the opportunity to sign Cyriel Dessers before the striker transferred to NAC Breda for the 2016-2017 season from Belgian club Sporting Lokeren.
Statistically speaking, the Super Eagles hopeful had his best season as a professional during his time with NAC Breda, contributing to an incredible 42 goals (29 goals, 13 assists) in 40 games across all competitions.
Eric van der Luer, who was Roda's scout, was unable to convince the technical director, Ton Caanen to sign the Belgian-Nigerian striker.
"And to think that we could have signed Cyriel Dessers during that period too," Eric van der Luer told Voetbal International (subscription required), according to NAC Fans.

"He came to watch a game here, he wanted to. I think Caanen was not that impressed. Until Dessers went to NAC and scored there every week. Why didn't Dessers play with us?".
Dessers' career has been on an upward trajectory since his arrival in the Netherlands and he emerged as the unofficial top scorer in the Eredivisie for the 2019-2020 season after finding the net fifteen times.
Igho Kingsley
Copyright ANS