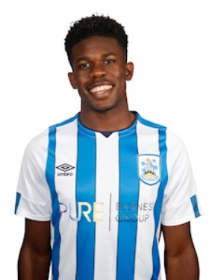 Allnigeriasoccer.com can exclusively report that box-to-box Nigerian midfielder Tim Akinola will certainly move on to pastures new in the upcoming transfer window.
It is confirmed that the highly-rated teenager will end his association with Championship club Huddersfield Town when he comes off contract with the club on June 30, 2020.
Regarded as one of the exciting players at the Academy, the Terriers were ready to retain him for next season but he asked for more money, which made the club not to trigger an extension clause.
Akinola's intermediary has claimed that several English clubs bigger than Huddersfield Town are interested in his client.
The 19-year-old joined Huddersfield in the summer of 2019 following a successful trial and was previously on the books of Lincoln City.
He spent a portion of this season on loan at non-leaguers Brighouse Town.
Ifeanyi Emmanuel
Photo Credit : htafc.com
Copyright ANS