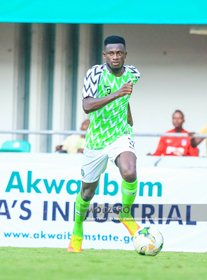 Nigeria national-teamer Jamilu Collins has been named in the SC Paderborn's starting lineup for their German Bundesliga clash against Fortuna Dusseldorf at the Spiel-Arena on Saturday afternoon, allnigeriasoccer.com reports.
The European Leagues were halted in March, apart from the Belarusian Premier League, due to the coronavirus pandemic, and the Bundesliga is the first major league to resume.
Provided Collins comes through the pre-match warm-up unscathed, he will become the first Nigerian-born player to start a league game in the European top five leagues since March 9.
Sixty eight days ago, Leicester City pair Wilfred Ndidi and Kelechi Iheanacho started for Leicester City in their 4-0 rout of Aston Villa in the Premier League, the last players born in Nigeria to feature for a club in the big five European Leagues.
Two Nigerian Federation targets born in Germany in the shape of Hertha Berlin's Jordan Torunarigha and Hoffenheim's Kevin Akpoguma have been included in the starting XI for their respective clubs, while Augsburg's Noah Bazee and Felix Uduokhai are in the 18 but start on the bench.
Former Everton winger Ademola Lookman has been named among the RB Leipzig substitutes against Freiburg at the Red Bull Arena.
Ifeanyi Emmanuel
Copyright ANS