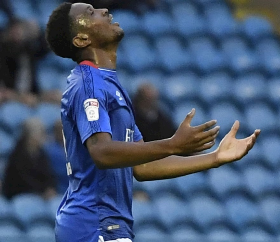 Former Manchester City midfielder Kelvin Etuhu has to look for a new employer before the start of the 2020-2021 season.

Football League club Carlisle United have published their retained and released list following the cancellation of the fourth-tier of English football and the Nigerian was among the ten players released.

Kelvin Etuhu, whose elder brother Dickson represented Nigeria at the 2010 World Cup, officially comes off contract with The Blues on June 30, 2020.

The 31-year-old joined Carlisle United in 2017 and is credited with 64 appearances for the club in all competitions and scored three goals.

Apart from the aforementioned clubs, Etuhu has also turned out for Rochdale, Leicester City, Cardiff City, Portsmouth, Barnsley and Bury.

Overall, he made ten appearances in the English Premier League during his time with Manchester City.

Meanwhile, former Arsenal youth-teamer Olufela Olomola has returned to his parent club Scunthorpe United, and the same goes for teenage striker Josh Kayode who is back at Rotherham United.