...the complete Nigerian football portal
Subscribe
'We Were Lucky That Uduokhai's Goal Was Ruled Out' - Wolfsburg Coach Admits After Win At Augsburg
Published: May 17, 2020 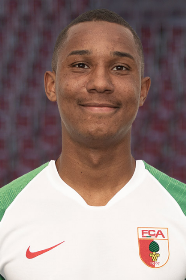 Wolfsburg coach Oliver Glasner has conceded that his side were lucky to get all three points in their 2-1 win at Augsburg on Saturday afternoon.
Just two minutes after his introduction off the bench, German-Nigerian center back Felix Uduokhai saw his goal, scored through a header, chalked off following a VAR review.
Renato Steffen opened the scoring for the visitors on 43 minutes, Tin Jedvaj restored parity for the hosts nine minutes after the interval, before a late goal from Daniel Ginczek condemned Augsburg to their thirteenth loss of the season.
Speaking post-match, Glasner said : "We’re really pleased that we won after the a long break. Winning it so late on is always slightly fortuitous, but we were the more dangerous side over the 90 minutes.
"We were lucky that Uduokhai’s goal was ruled out, but I think we were the better team overall.
"My team’s reaction after they scored pleased me, we put more pressure on them. I think we deserved to win".
Wolfsburg-owned Uduokhai is spending the whole of this season on loan at Augsburg. He has now made 19 appearances in the Bundesliga this term.
Igho Kingsley
Photo Credit : fcaugsburg.de
Copyright ANS