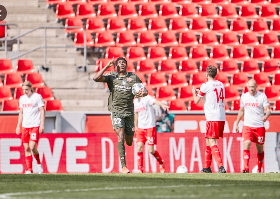 Liverpool-owned striker Taiwo Awoniyi finally opened his goalscoring account for Mainz 05 as they were held to a 2-2 draw by Kingsley Ehizibue's Cologne at RheinEnergieStadion on Sunday afternoon, allnigeriasoccer.com reports
It was his first goal in German football since he found the net against FC Heidenheim in March 2016 while wearing the colours of FSV Frankfurt.
Cologne established a two-goal lead through Mark Uth and Florian Kainz but Awoniyi came off the bench in the 55th minute and repaid the manager's faith by pulling a goal back six minutes later.
The former Nigeria U23 international bundled the ball home from close range, assisted by Bote Baku.
Pierre Kunde's spectacular solo goal in the 72nd minute gave Mainz a share of the points.
With his second half goal today, Awoniyi became the seventh youngest Nigerian-born player to score in the German Bundesliga aged 22 years and 279 days.
Austin Okocha and Super Eagles scout Victor Agali are the only Nigerian teenagers to score in the Bundesliga, with the former Eintracht Frankfurt playmaker the youngest at 19 years, 3 months and 28 days.
Solomon Okoronkwo, Anthony Ujah, Sunday Oliseh and Chinedu Obasi were all younger than Awoniyi when they netted their maiden goals in the German top division.
Ifeanyi Emmanuel
Photo Credit : mainz05.de
Copyright ANS