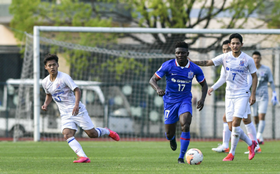 Super Eagles striker Obafemi Martins continues to train with Chinese Super League outfit Shanghai Shenhua ahead of a possible move before the start of the 2020 season.
Despite the fact that the former Newcastle United star has not played competitive football for more than two years with his last appearance coming against Kashima Antlers in the AFC Champions League in April 2018, he has looked very sharp in training.
Should Manchester United agree terms with Shanghai Shenhua for the permanent signing or extension of Ighalo's loan deal which expires at the end of this month, Martins is the top candidate to replace the the 30-year-old at the Chinese club.
Martins has scored twice in the last three friendly games he has been involved in, including yesterday's 5-2 victory against the White team in the Blue and White Competition.
The 35-year-old is waiting to see whether or not he will be offered a contract by Shanghai Shenhua.
"I am still working hard to see what happens next," Martins was quoted as saying by Sports Sohu.

"I'm very excited to come back here, and I am very happy to be able to score goals to help the team. This game helped me adjust my state and recover to the best."
In 59 outings for Shanghai Shenhua before he was released at the end of the 2018 season, Martins was involved in an impressive 41 goals (32 goals, 9 assists).
Igho Kingsley
Photo Credit : shenhuafc.com.cn
Copyright ANS