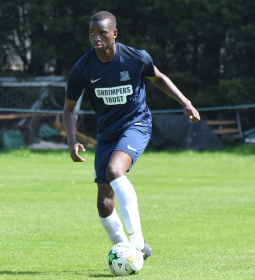 With a statement on their official website, League One club Southend United have announced that promising Nigerian defender Idemudia Udebhu-Osimeh has been retained for the 2020-2021 season.
The 2000-born player has accepted to sign his first professional contract with the Shrimpers.
Osimhen was loaned out to Isthmian League North Division club Brentwood Town at the beginning of the season to enable him get first team experience.
Allnigeriasoccer.com understands that he trialed at Southend United at the age of fifteen but was rejected and a year later the club reversed their decision after impressing at left-back in another round of trials.
Prior to his move to Southend United in the 2016-2017 season, he spent two years at the Arsenal Academy and turned out for the youth team of Leyton Orient.
Following his release by Leyton Orient at the age of twelve, he was training on his own and went on trials at clubs in England.
Ifeanyi Emmanuel
Copyright ANS