...the complete Nigerian football portal
Subscribe
German-Nigerian Center Back Named To Bundesliga Team Of The Week
Published: May 19, 2020 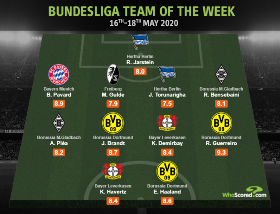 German-born Nigerian central defender Jordan Torunarigha has been named to Whoscored.com's Bundesliga Team of the Week following the conclusion of the matchday 26 fixtures.
The former Germany U20 star was impressive in the heart of defence as Hertha Berlin registered a 3-0 win against Kevin Akpoguma's Hoffenheim.
In a 4-4-2 formation, Torunarigha was partnered by Manuel Gulde (Freiburg) in the Team of the Week and was awarded a rating of 7.49 for his efforts.
"Hertha's young centre-back has certainly made a good impact since returning to the side from injury this year and put in another impressive display on Saturday," the football statistics website said on Torunarigha.
"The 22-year-old was credited with the assist for Matheus Cunha's superb solo goal - arguably the best of the round - an completed an exceptional 94.4 per cent of 72 passes in total, including ten long balls."
Torunarigha has been involved in ten Bundesliga matches, of which eight were starts, so far in the 2019-2020 campaign.
Igho Kingsley
Copyright ANS