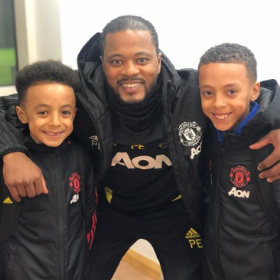 Allnigeriasoccer.com can exclusively report that Cole Marsden- Umebuani's contract with Manchester United is for one year, which runs until the end of the next football season.

The 8-year-old striker who completed his move from Fletcher Moss Rangers recently to team up with the Red Devils U-9 team will hope to catch the eyes of the youth team coaches at Carrington, in view of earning himself an extended stay with the Premier League giants at the end of next campaign.

Thus, he will be released or retained and offered another contract after his first season with the club, based on his performances during his solitary year deal.

He was one of the latest influx of talents at the youth ranks of Old Trafford, joining the likes of Teddy Sherwood, Jaice Dore, Rafael Smith, Dane Mullings and Ka’eo Ingram to move to the club.

Having earned comparisons to first-team star Paul Pogba, Umebuani has been described as a speedy player who likes to dictate the tempo of a game as well as take on opposing defences with his skills

It is confirmed that the kid is eligible to represent Nigeria's youth teams when he comes of age,if the granfather rule is invoked.