...the complete Nigerian football portal
Subscribe
'Crystal Palace Offered Me A Bad Deal' - Semi Ajayi On Why He Rejected Eagles For Arsenal
Published: May 21, 2020 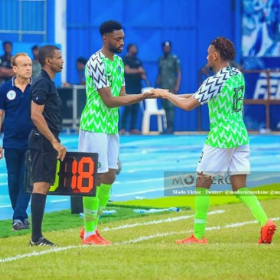 Semi Ajayi has opened up on why he rejected the chance to join Crystal Palace in 2013 in favour of a switch to Arsenal, saying he was offered a bad deal by the Eagles after a successful trial.
The Nigeria international had to look for a new employer after refusing to extend his stay at Charlton Athletic, where he had spent a decade with their youth teams.
Brentford and Norwich City also explored the possibility of signing Ajayi before Arsenal won the race for his signature.
"I went on trial at Brentford first, then Norwich that went well but they were not ready to offer me, they were stalling, stalling, so I went on another trial at Crystal Palace," Ajayi said on Instagram Live .

"After two weeks, Palace offered me a deal but it was a bad deal, it wasn't a good deal and my agent was telling me am I not going to sign that and the manager said I'm not going to get anything else.

"The next day my agent told me he had been on the phone with Arsenal and they want me to come in for a trial.
"I told Crystal Palace U23 manager at the time that it was my last day and going elsewhere, Arsenal and he couldn't believe it, he told me they could offer me a better deal and I should tell my agent to ring him.

"Went on trial to Arsenal, trained for a week, played my first game against Blackburn U23s, scored.
"Played another game at home against West Brom, played one of the best games in my career and from there I was offered a two-year deal."
Ajayi admitted that he left Charlton Athletic because they doubted his ability and offered him a short-term deal while several of his teammates got longer contracts.
"There was talk about renewing my deal but we had a very, very good age group, like six or seven of my age group had all been offered at least a year and then they are coming to me and they want to offer me six months.

"I'm looking up and thinking I have done my thing this year, 'why am I getting only six months and everyone is getting a year, two years' and they said they want to keep me on my toes, keep me hungry, so you come back.

"I sat down with my family, with my agent. I have been at Charlton since I was nine years so it's all I knew, so to turn down that contract was a big thing for me, so we decided to turn it down.

"I've just come back from playing with the Nigeria U20s at the Toulon Tournament. All I was asking was for a year, not a lot, if they don't rate me then I'm going somewhere else," Ajayi explained.
Five years after departing Arsenal, Ajayi has become an influential player for promotion-chasing West Brom and has forced his way into the Super Eagles starting lineup.
Ifeanyi Emmanuel
Copyright ANS