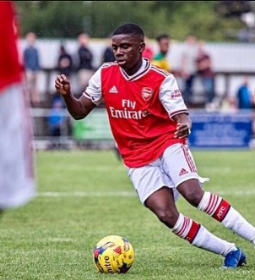 Nigerian starlet Nathan Butler-Oyedeji has revealed that Arsenal beat Chelsea to his signature due to logistic problems as he lived far away from Cobham Training Center.
Looking back, the pacy winger says he does not regret his decision to join the Emirates Stadium outfit, adding that his dad sanctioned his move to the north London club.
Oyedeji signed a scholarship with the Gunners in July 2019 and featured in thirteen matches in the U18 Premier League this season before suffering a knee injury against West Ham in February.
"I was scouted from Leyton Orient, when I was training at Leyton Orient there was an Arsenal scout watching. After I got scouted at Arsenal," Oyedeji said in an Instagram conversation with Deluded Gooner.

"At that time you can go around different clubs, I went to Chelsea, I was at Chelsea. I live in East London and Chelsea's training ground is outside London, Cobham.

"In primary school, my mummy comes back from work, picks me up from school, I had to go straight to the train station, eat food on the train - two-hour train journey.

"My dad always wanted me to play for Arsenal and I love Arsenal, it was a good choice for me, looking at hindsight."
Butler-Oyedeji has been invited to train with Arsenal first team this season and made his debut for the U23s in an EFL Trophy clash against League One team Peterborough United in October 2019.
Ifeanyi Emmanuel
Photo Credit : arsenal.com
Copyright ANS