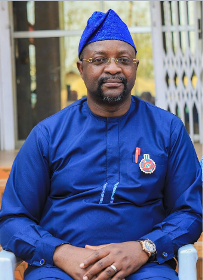 The Minister of Youth and Sports development in Nigeria, Hon. Sunday Dare has continued with his fine gesture of paying visits to families of fallen sporting heroes across the country.
Earlier today in Jos, Plateau State, North Central Nigeria, the Honorable Minister sent various levels of food items and the sum of fifty thousand naira (N50,000) to the mother of late former Nigeria International defender Ali Jeje.

The cash and items were presented to the mother of the late Ali Jeje on behalf of the Minister by famous journalist Yemi kosoko and former Nigeria international footballers Sam Pam Jr., Salisu Nakande and Sani Adamu in the presence of most members of the entire family and members of the press.

The Minister also promised to pay the mother a monthly stipend to ease her challenges just as was done recently to the mothers of Rashidi Yekini, Samuel Okwaraji and Sunday Bada.

Jeje died of an ailment in Jos some years ago.