...the complete Nigerian football portal
Subscribe
Ojo Gives Strong Hint About Return To Liverpool After His Most Successful Loan Spell
Published: May 21, 2020 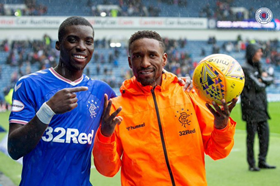 Nigeria Football Federation target Sheyi Ojo has strongly hinted that he will return to his parent club Liverpool when his contract with Glasgow Rangers expires at the end of next month.
The 2017 England U20 World Cup-winning winger joined the Scottish Premiership side on a season-long loan last July and it is his most successful loan move to date in terms of games played and goal contributions.
The 22-year-old was involved in 12 goals (5 goals, 7 assists) in 36 games in all competitions for Rangers, surpassing his tally during his loan spells at Wigan Athletic, Wolverhampton Wanderers, Fulham and Reims.
In a social media post with an accompanying video highlighting his best moments in a Rangers shirt, Ojo said : "Best fans in the world no doubt. You guys gave me love & some moments in my life I’ll never forget. Thank you @RangersFC".
Ojo was touted as one of the brightest prospects at the Liverpool Academy and he displayed his potential when he was handed game time by manager Jurgen Klopp.
He has been on the books of Liverpool since the age of fourteen following his move from MK Dons.
Igho Kingsley
Photo Credit : rangersfc.co.uk
Copyright ANS