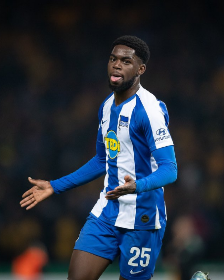 A round-up of Nigerian players that were in action for their respective clubs in the German Bundesliga on matchday 27.
Nigerian players with dual nationalities and have played competitively for the senior national teams of other countries have been omitted.
On Friday, Nigerian Federation target Jordan Torunarigha started and was in action for 90 minutes as Hertha BSC thrashed Anthony Ujah's Union Berlin 4-0 in the Berlin derby at the Olympiastadion.
Second half goals from Vedad Ibisevic, Dodi Lukebakio, Matheus Cunha and Dedryck Boyata gave Hertha a comprehensive win.
Nigeria international Anthony Ujah was introduced off the bench for the visitors 12 minutes after the restart. Teammate Suleiman Abdullahi did not make the matchday squad.
Let's go to Benteler-Arena for the game between SC Paderborn and Hoffenheim. It ended one goal apiece.
Robert Skov on 4 minutes broke the deadlock for the visitors but the lead lasted only five minutes with SC Paderborn's Dennis Srbeny restoring parity.
While Super Eagles left-back Jamilu Collins logged ninety minutes, former Germany U20 skipper Kevin Akpoguma watched proceedings from the bench for the entirety of the game.
In the evening kickoff, Netherlands U19 international Joshua Zirkzee is on the bench for Bayern Munich in the ongoing game vs Eintracht Frankfurt. The champions lead 1-0 courtesy of Leon Goretzka's 17th minute goal.
Ifeanyi Emmanuel