...the complete Nigerian football portal
Subscribe
Chelsea's Argentina GK Knew He Was Going To Be Dropped From Starting XI Vs Nigeria 2018 World Cup
Published: May 26, 2020 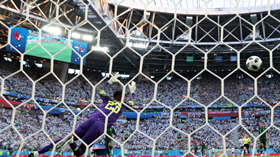 Chelsea goalkeeper Willy Caballero has revealed that he knew he was going to be dropped from the Argentina starting lineup to face Nigeria in both countries final group game at the 2018 World Cup.
Initially, Caballero was Argentina's first-choice goalkeeper during the tournament in Russia, starting against Iceland and Croatia, but had to make do with a place on the bench in their last two matches following his error that led to Ante Rebic opening the scoring in their 3-0 defeat suffered at the hands of Croatia.
Caballero miskicked a back-pass and Argentina were punished in stunning fashion as Rebic thumped home a volley in the 53rd minute.
The 38-year-old said that the then Argentina coach Jorge Sampaoli informed him Franco Armani was starting against Nigeria in the days leading up to the clash in St.Petersburg.
"Jorge's decision is also understood. We all knew it, because days before we had trained and Armani was in the place I was in," Caballero said to TNT Sports.

"But Jorge told me and I went to the room and told Franco. I told him to count on me, to take advantage and enjoy it.

"I confirmed to Franco that he was playing against Nigeria."
An Argentina side containing Barcelona captain Lionel Messi were on the brink of elimination from the 2018 World Cup with four minutes left, only for Marcos Rojo to volley home the winner.
Chelsea winger Victor Moses had converted a spot kick five minutes after the restart to cancel out Messi's 14th minute opener.
Ifeanyi Emmanuel
Photo Credit : fifa.com
Copyright ANS