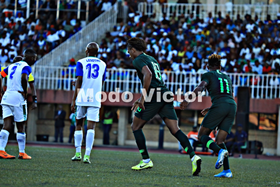 Alex Iwobi has revealed that he was well treated by the English Football Association but decided to switch his international allegiance from England to Nigeria because of his Nigerian heritage.
The former Arsenal star had already been capped by England at U16, U17 and U18 levels before traveling to Abuja to trial with the Nigeria U23 team ahead of an African Games qualifier against Gabon.
Iwobi made two cameos for the Super Eagles against Cameroon and DR Congo in October 2015 before playing his cap-tying game for Nigeria in an Africa Cup of Nations qualifier against Egypt in March 2016.
"I will always have my respect for England, when I played for England they gave a great opportunity, they treat me very well," said Iwobi on Instagram Live.

"However, I feel like I am a true Nigerian, I grew up in the Nigerian culture and when I had the opportunity to go back I felt more at home playing for Nigeria.

"But when I had the opportunity to go and trial for the U23s is when I thought there was a lot of love for football - the way I was treated there - and these times I didn't have the profile I had today. I was really excited to play for the U23s.

"Even though the organization may be a bit different to England, I really enjoy it. Even to this day I have no regrets."
Iwobi could well be on his way to becoming one of the most capped Nigeria players in history with an impressive 40 international caps under his belt before turning 24 years old.
Ifeanyi Emmanuel
Copyright ANS