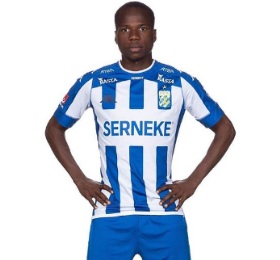 IFK Goteborg have extended the contract of Nigerian midfielder Alhassan Yusuf, Sports Manager of the Swedish Allsvenskan side, Kennet Andersson has revealed.
Premier League duo Wolverhampton Wanderers and Sheffield United have been linked with a move for the promising teenager in the summer transfer window after impressing in his debut season in Sweden.
And he has picked up from where he left off last season, bagging three assists in four matches in the Svenska Cupen before sporting activities were suspended in Sweden.
"We extended it and we did that until 2022. We did this last year. Somewhere there," Andersson said to Goteborgs-Posten (subscription required).
Andersson has refused to confirm reports whether Ajax Amsterdam and FC Copenhagen are interested in the 19-year-old.
"I saw it, but know nothing about it," he said.
Yusuf was in contention to feature for the Flying Eagles at the 2019 FIFA U20 World Cup but was not released by IFK Goteborg.
Igho Kingsley
Photo Credit : instagram.com/alhassanyusuf10
Copyright ANS