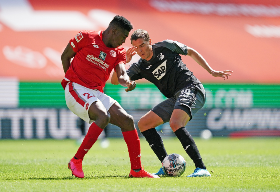 Liverpool loanee Taiwo Awoniyi has admitted that Mainz paid the price for their missed chances as they suffered a 1-0 defeat at the hands of Kevin Akpoguma's Hoffenheim at the OPEL Arena on Saturday afternoon.
Mainz have found goals hard to come by in their last three Bundesliga matches, scoring only once in a 1-1 draw vs Union Berlin on matchday 28.
Awoniyi thought he had scored his second Bundesliga goal when he got the ball in the net in the 61st minute, only for the goal to be disallowed by the referee as Hoffenheim goalkeeper Baumann was apparently fouled in the build-up.
Super sub Ihlas Bebou netted what proved to be the game-winning goal two minutes before halftime following a quick counter attack.
Sharing his disappointment after the game, Awoniyi said : "This is a huge disappointment for all of us.
"We should have decided the outcome of the game in the first half but we didn't take our chances."
Awoniyi has now logged 216 minutes since the resumption of the Bundesliga, more than he managed in the first 25 games of the season.
Igho Kingsley
Photo Credit : mainz05.de
Copyright ANS