...the complete Nigerian football portal
Subscribe
'We Like Him' - Rohr Hints At Call-Up For Liverpool's Ex-England U20 World Cup-Winning Midfielder
Published: June 01, 2020 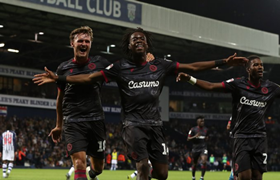 Liverpool-owned midfielder Ovie Ejaria is in line to receive his first-ever call-up to the Super Eagles, provided a one-time change of association from England to Nigeria is approved by FIFA before the next international window, Nigeria manager Gernot Rohr has hinted.
The London-born Ejaria trained with the Golden Eaglets class of 2013 that contained the likes of Taiwo Awoniyi, Kelechi Iheanacho and goalkeeper Francis Uzoho, but was omitted from the World Cup roster because coach Manu Garba had doubts about his physicality.
Four years later in South Korea, the Reading star was a member of the Young Lions squad that won the FIFA U20 World Cup and debuted for England U21s the following year in a friendly against Romania.
Asked to provide an update on Ovie Ejaria, Rohr told Channels Television : "This player is one of the players we are looking for, we are in touch with him.

"These players who have played already for the youth teams of other countries, there is a process to do. They have to write a letter to FIFA, they have to follow some rules to change.

"Ejaria is one of the players, we like him, and we could invite him. We have other ones, you know the names, I won't give you all the names.

"Players like him could have the chance and I hope we have some friendlies, you see the calendar now, it is very difficult to have friendlies because we have to do the qualifiers for the AFCON and World Cup, it will be difficult now to start the qualifiers in November.

"We need friendlies to test these players, and it will be good to do it in September."
This season, former Arsenal youth-teamer Ejaria has played 35 games for Reading, scoring three goals and has four assists to his name.
Ifeanyi Emmanuel
Photo Credit : readingfc.co.uk
Copyright ANS