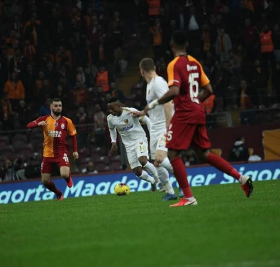 Kayserispor defensive midfielder Anthony Uzodinma was full of praise for French World Cup winner N'Golo Kante as he cited the Chelsea star as his role model.
The 21-year-old is on the periphery of the Kayserispor first-team, having appeared in two competitive matches this season and frequently trains with the main squad.
Uzondinma says he dreams of playing for Chelsea in future and has been studying Kante in order to improve his game.
"My dream club has always been Chelsea. When I was not yet a professional I was a Chelsea fan, " Uzodinma said to allnigeriasoccer.com.
"I play as a defensive midfielder. I can also play as a right fullback, sometimes as an attacking midfielder like the game against Galatasaray first team."
On his idol, he said : "There is this player I admire so much, N'Golo Kante, he is my idol, I love the way he plays and I wish I can do more than what he has achieved.

"Kante is strong, it is difficult to take he ball from him, I watch how he goes for the tackle, comes from the blind side to win the ball.
"I am watching him to learn more from him and to improve as a player.''
Uzondinma's first professional club abroad was Al Khartoum Sports Club in Sudan, from where he moved to Kayserispor in August 2019.
Ifeanyi Emmanuel
Copyright ANS